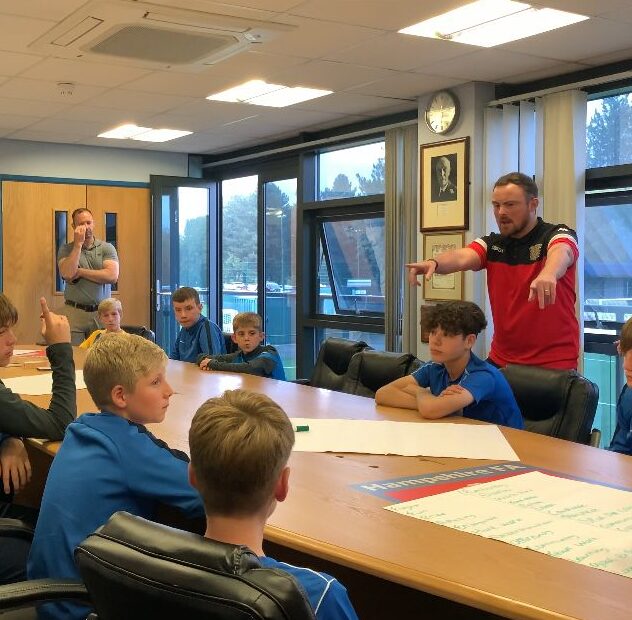 Earlier in the month the football committee proudly created the club’s first ever Leadership Group comprising of two members from each Junior side carefully selected by our coaches.

The leadership group was created as a task-force to help shape the future culture of our club – outlining what it means to play for Basingstoke Town, what it should represent, the standards from which we work and also what they expect from the club to help them achieve success.

In a session led by first team manager Dan Brownlie and Aaron Nicholson before our impressive display against Portsmouth FC, the newly appointed group were challenged to think about what it means to play for the town and to hold discussions in smaller groups about how as individuals, teams and the club as a whole can continue to raise standards.

Dan Brownlie noted: “We want that when you meet someone who represents Basingstoke Town that there is already a stamp of approval. A pre-existing knowingness of their punctuality, professionalism, work ethic and politeness, for their own development but also as a mark of respect to the badge they are representing. We have a responsibility for our young players development and we want it to go further than the pitch.”

“The session was really enjoyable, and it was so rewarding hearing just how much this club means to these young players. Equally they have already started to see the progression available with so many ex-junior players representing the club at a first team level. We spoke about the importance of little standards – like ensuring you say thank you to your coaches after sessions or making sure you shake the hands of club officials and volunteers to say hello. Already we have seen this put into practice – and whilst it may not seem much, these little touches really improve the culture of the club and the connectivity of it. It breeds confidence, it breeds the idea that whilst we may be separated in to our own little squads, together we remain a team. All these little touches will amount to a lot – and the leadership group will help us communicate it to the teams and be responsible for helping to enforce the guidelines that they themselves have laid out.”

As a club we recognise the importance of developing our young players not just on the pitch but off of it as well. Congratulations to all the young leadership team members who have been selected for the year…