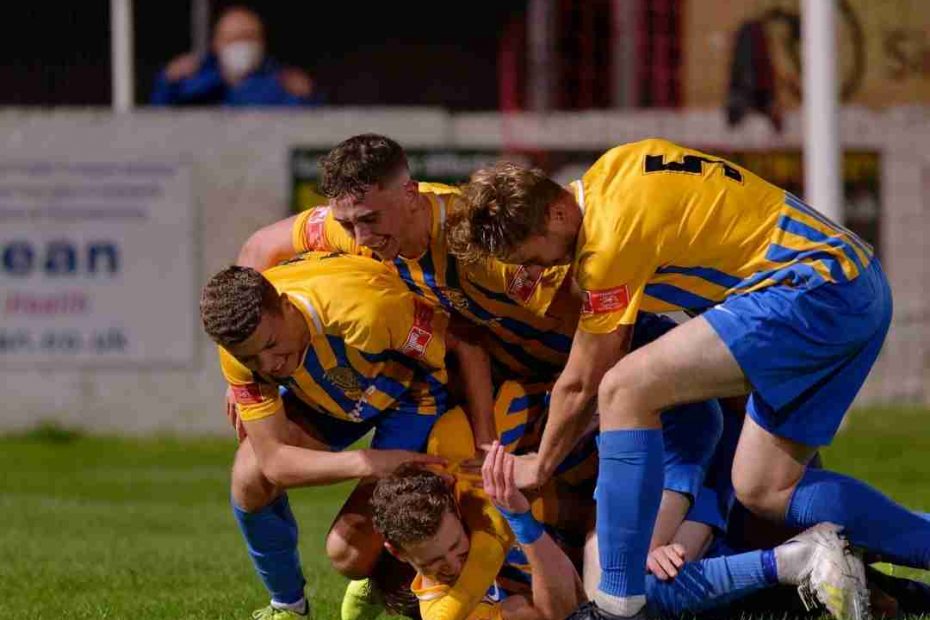 A Bradley Wilson hat-trick, alongside goals from Ben Cook, Dylan Ive and the returning George Hallahan, with some outstanding saves from ‘Stoke keep Julian Schwarzer, saw Basingstoke Town continue their unbeaten start to the season on Saturday, running out 6-3 winners away to Cinderford Town.

Cinderford started the better of the two teams and forced Schwarzer in the ‘Stoke goal into two early saves to keep the scores level. Then, in the 22nd minute and completely against the run of play, ‘Stoke found themselves in the lead. The ball was fed from the Basingstoke left, to Bradley Wilson on the right. He touched it past the Cinderford left back and into the penalty area, before slotting the ball into the far corner of the Cinderford goal.

Getting the opening goal seemed to calm nerves in the Basingstoke camp and only 10 minutes after the first goal, they grabbed a second. A George Reid cross was met by the arriving Ben Cook, who smashed his first-time shot past the Cinderford keeper to double Basingstoke’s lead.

Schwarzer was soon called on once more and he pulled off two world-class saves. A shot hit goalward looked like it was flying in, but Schwarzer got a hand on it. The rebound fell to a Cinderford attacker who headed it back towards the empty net, when Schwarzer flung himself across his goal to parry the ball away and the Town defence cleared its lines.

In the 41st minute, Cinderford managed to halve the deficit. A Cinderford shot on goal came off the post and the rebound fell to Cinderford’s Lewis Spurrier to grab his first goal of the afternoon. The lead was almost instantaneously doubled again for Town by Dylan Ive, who hit a hopeful shot towards goal, which somehow squirmed underneath the Cinderford ‘keeper, to see ‘Stoke take a 3-1 lead into the break.

Basingstoke started the second half extremely fast and in the 46th minute Wilson added his second of the game, volleying home Palmer’s cross to make it 4-1. Less than 10 minutes later, Wilson completed his hat-trick, bringing the ball under control from 8 yards out before firing home.

‘Stoke were now flying high, but in the 75th minute, the pendulum swung back into Cinderford’s favour. Two quick goals from Spurrier, grabbing his second, and William Gibbons in the 77th minute bringing the score back to 5-3.

There were chances at either end in the last 15 minutes of the game, before Lloyd Snell was brought down in the Cinderford penalty area in the 92nd minute. The returning Hallahan stepped up and sent the Cinderford ‘keeper the wrong way, confirming that all 3 points would be coming back to Basingstoke.

‘Stoke are now top of the table and the only unbeaten team in the League this season. Their next game is away at Moneyfields on 17th October, 3pm Kick-Off in the 2nd Qualifying Round of the Buildbase FA Trophy.