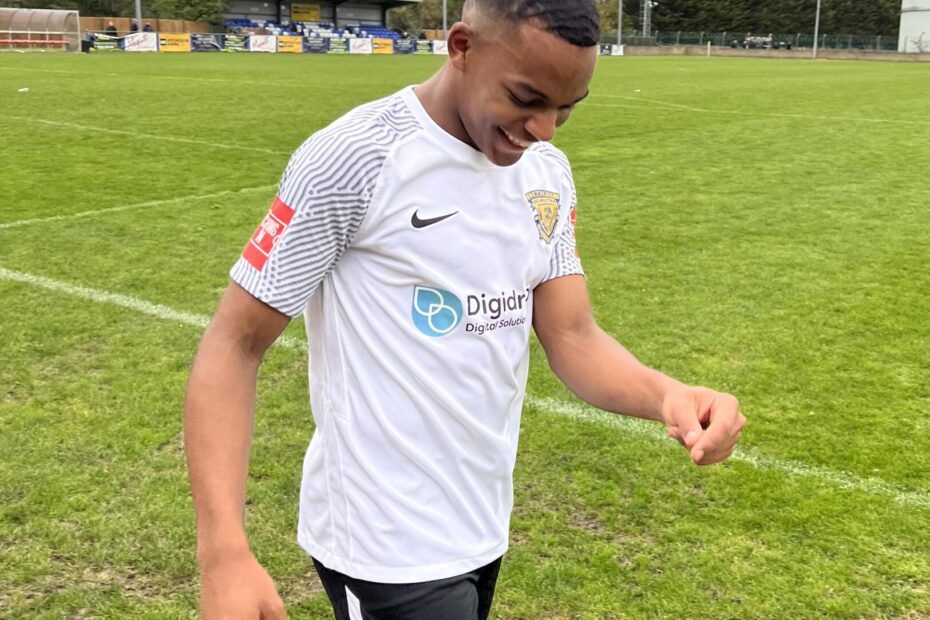 Basingstoke started the better of the sides and on 8 minutes, captain Simon Dunn struck the outside of the post after cutting in neatly from the left.

A minute later and ‘Stoke took the lead which began with a great run down the right from Bradley Wilson who delivered an early ball in to meet the head of Conor Lynch who nodded in his 13th of the season, low across the Ashford Town ‘keeper.

On the 15 minute mark, some good work from the relentless McKoy Palmer down the left ended with a deep cross which was headed from a tight angle by Bradley Wilson but Paul McCarthy in the Ashford goal was equal to it.

Paul Strudley was called in to action for the first time on 30 mins when he made a strong one handed save at his near post.

Basingstoke were largely dominant and Bradley Wilson made himself a chance to double the lead but his effort was comfortably saved.

Shortly after, in the 44th minute, the lead was finally doubled as Conor Lynch was felled and Basingstoke made the most of the advantage after some good work from Ben Cook who found McKoy Palmer who shimmied through a couple of challenges before firing low in to the bottom corner.

After what was a relatively comfortable first half for ‘Stoke, Ashford Town made a game of it after the interval.

Basingstoke got the ball wide well on a number of occasions but there was no one on the end of a couple of low drilled crosses in the opening stages of the second half..

On 66 minutes, Basingstoke were made to pay when Paul Strudley was rounded and Connor Cullen pulled back a goal for an Ashford Town side who were growing in confidence in to the game.

Just 3 minutes later and Ashford were level as a ball over the top was driven across the 6 yard box for Ethan Hellyer to put his side back in the game for 2-2.

With 10 minutes to go it was Ashford who nearly stole it as a cut-back wasn’t cleared by anyone in a white shirt but the well struck effort was matched by Strudley in the ‘Stoke goal.

It was then Basingstoke’s chance to win the game as Conor Lynch was unable to place his shot on target followed by a number of other opportunities by a ‘Stoke side who looked like the more likely to win it.

Lloyd Snell came on to the pitch on the 86th minute and it was the young Academy player who sealed it a few of minutes later.

A long diagonal pass from Scott Armsworth was picked up by Snell on the left wing who used his pace to beat his man, cut back and then send a fierce shot in to the back of the net to leave the away side and fans in raptures.

Basingstoke’s strong start to the season continues as Dan Brownie’s side remain unbeaten in the league with a record of 6 wins and 1 draw which moves ‘Stoke to within 3 points of the top, with 2 games in hand.