We caught up with Dan Brownlie and his plans for pre-season following the announcements of our pre-season fixtures:

“First and foremost, we’re looking forward to getting back! It’s felt like forever – but it finally feels like football is coming home. It was great to see some of our supporters supporting our Youth team last week and it was another reminder of just how much I missed being out there.”

“We may add in a couple more friendlies as we go, but for the time being we’re happy with what we’ve put together. We’ve got a good mix of home and away games and some great fixtures among them including the likes of Hashtag United, who will certainly appeal to our younger audience and a tasty trip to Chichester who put us out of the FA Cup last season in what was a decent game of football.”

“We’re planning on starting training towards the end of June, but we may put on a few earlier sessions in the build up to that – just to allow for some of the boys to find their feet before we start the intensive work to ready ourselves for the season.”

“With no fixtures ourselves, its been nice to get out and have a look at some of the younger lads coming through – there’s certainly some talent, so we’ll try to bleed them in as best we can and see where about’s they are, but its important they get a flavour for the standard.”

“In fairness to the lads, they’ve all looked after themselves – of course, match fitness is a different beast but they’ve stayed within touching distance. The few sessions we’ve had with the first team – they’ve actually looked pretty sharp, so hopefully we can quickly shift our focus on to some of the finer aspects to prepare for the season ahead.”

“With our recent league change I think we are arguably entering the most competitive step 4 league in the country which comprises of three FA Vase finalists in just the past five years, some very well established teams, some great managers and some healthy looking budgets! So we’re under no illusions that we’re going to have to be ready to go to war every week. There will be no gimmies in that league, but I will always back our boys – they’re made of strong stuff and they love a challenge. For now, we’ll be getting our heads down and preparing to make sure we can hit the ground running”

Season tickets annoucements will be made in the next couple of weeks! Stay tuned. 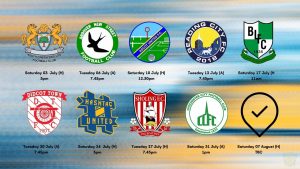