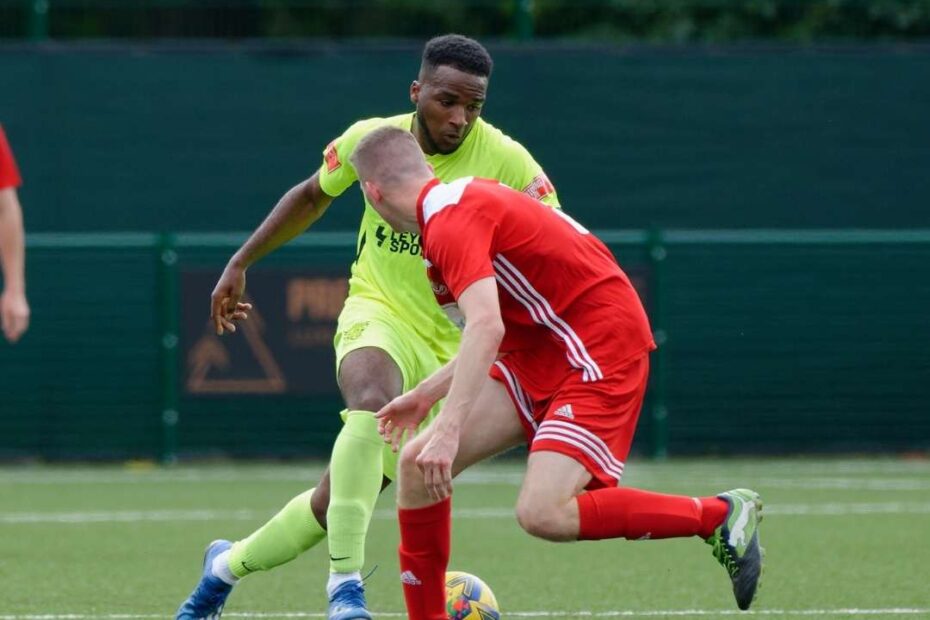 It is with great pleasure that we can announce that attacker Mckoy Palmer has re-signed forms for the 2021/22 campaign.

The popular winger signed from Reading Town during the early stages of last pre-season and has had some notable performances since his signing – including of course the immediate impact when he played a pivotal role in helping bring us back from a 3-0 deficit away at Slimbridge that we eventually went on to win the game 3-6.

Dan Brownlie commented on the retention of the skilful forward:

“We love him here. He’s a talented boy, there’s no question about that. For as confident as he appears on the pitch with all his trickery and skill – it’s only recently that we think he’s realising just how good he is and more to the point, just how good he can be. He’s worth the entrance fee and travel alone as he is one of those players that when he receives the ball – there is that level of anticipation, you can hear it in the crowd, there’s a raise of excitement.”

“I’ve worked with players in the past with similar levels of skill but what sets McKoy apart is that his trickery has purpose. It’s not a ‘look at me’ moment, his constant thought is about creation of goals and assists. There are areas of his game that we can look to improve which is a scary proposition, but we’re very proud of his continued development and his willingness for it – and we’re very pleased to have him back on board.”

A special mention to the Supporters Club who have picked out Mckoy Palmer as someone they wish to support this year and have become an ongoing sponsor of his. Dan Brownlie commented: “It makes the world of difference knowing that the Supporters Club are there and showing real faith in what we are trying to do here. They’ve picked a good one in McKoy – he’s a crowd pleaser and you can understand why they went for him.”

The supporters club have already shown support Lloyd Snell, Stefan Brown and now with the newly announced Mckoy Palmer – a huge thank you from everyone at the club for their ongoing support.