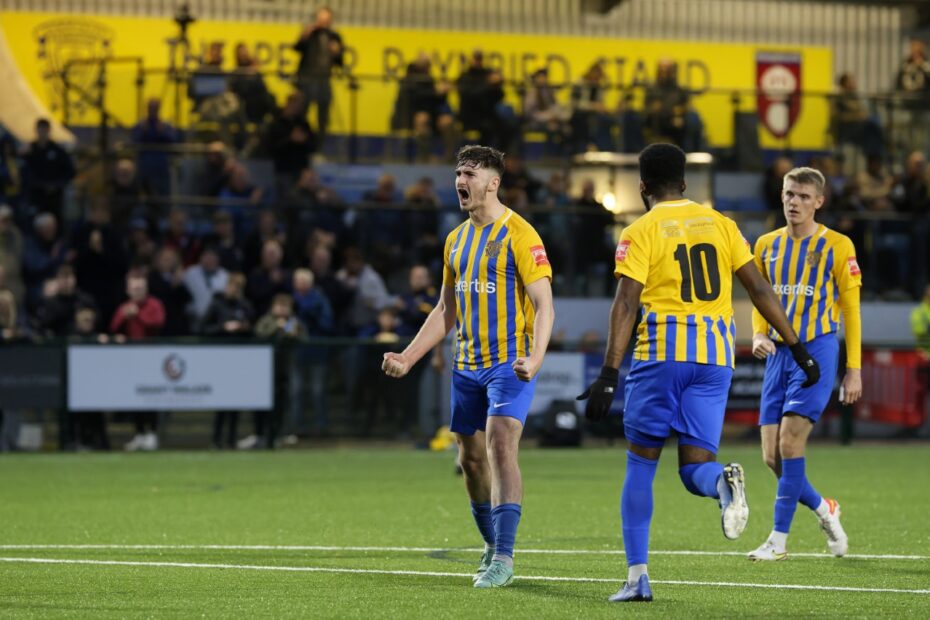 We’re looking forward to hosting the staff, players and supporters of Northwood FC on Saturday in our second league game of 2022.

Basingstoke won the away fixture back on October 19 thanks to a stunning close-quarters volley early in the second half by Conor Lynch which saw us win 1-0 in a tightly contested game played in horrendous weather. Northwood are almost unrecognisable in terms of personnel since that defeat – their recent midweek 2-1 win against high-flying Bedfont Sports in the cup showcased just one player in the shape of defender James Burton that was in the starting XI that faced us.

The new look side has been formed by Ben Bukowsk who was appointed as Manager the following month and has brought in a large amount of signings including former Potters Bar Town favourite Andy Lomas. Former QPR Academy wideman Ryan Young and Sydney Ibie who previously played for Chalfont St Peter and Hemel Hempstead Town have both joined ‘The Woods’. Attacking midfielder Micah Jackson joined from Enfield Borough, whilst another midfielder, Carl Stewart, moved from Beaconsfield Town. Northwood more recently have also announced the signing of winger Kyal Williams, who moves over from Southern League side Kings Langley and Josh Helmore from Binfield who scored eight goals in sixteen matches, including a run of five in five at the start of Binfield’s campaign.

Northwood currently sit in 16th place after playing 19 games with 13 points but despite sitting towards the bottom of the table recent results have included a 4-2 thumping of Chertsey Town and a 1-0 win over at Binfield.

Basingstoke go into this game on a four game unbeaten run following a more than convincing 10-0 win against Stockbridge in the North Hants Senior Cup. Brad Wilson is back available for selection following his three game suspension and he returned in emphatic fashion by scoring six of the ten goals. Shaun Dallimore also returned to the fold and could be in contention to return to the squad this weekend.

“We’ve got lots of options going into Saturday” said Manager Dan Brownlie, “as it stands we’ve pretty much got everyone available aside from the obvious longer term issues, the only other absence that we’ve had is Aidan Lewis who had returned to Leeds for family reasons, but should be back training with us in the coming weeks. It’s great that we’ve finally got bodies back and hopefully we can benefit from it over the coming weeks. Northwood were a difficult side when we played them last, made more difficult by the conditions, but with it being an almost entirely new team – it just means we have to focus on our performance and if we need to adjust a few things in game, then we’ll do so. Admittedly, I don’t know too many of their players aside from Helmore who is a real talent, and if the rest of their new signings are anything like him then we’re going to have a real game on our hands. The nature of non-league doesn’t allow you to read too much into league positions, even at this late stage – an entire team can change from a Saturday to a Tuesday so we just need to focus on applying our game to the best of our ability.”

“There were some good performances on Tuesday and I was pleased with the tempo of our play – but there will be a lot of changes from the game. There’s competition for places which is a great thing, but as well as that – the more positive aspect is that we have lads ready to go and up to speed, so we can keep lads fresh, rest some on occasion and it not be a detriment to our play. We have the luxury of the 4G, but with heavy pitches and lots of games left to play – it’s important we box clever with what we have.”

Tickets can be purchased online for the game by following this link.