Getting To Know You: Kevin Winter 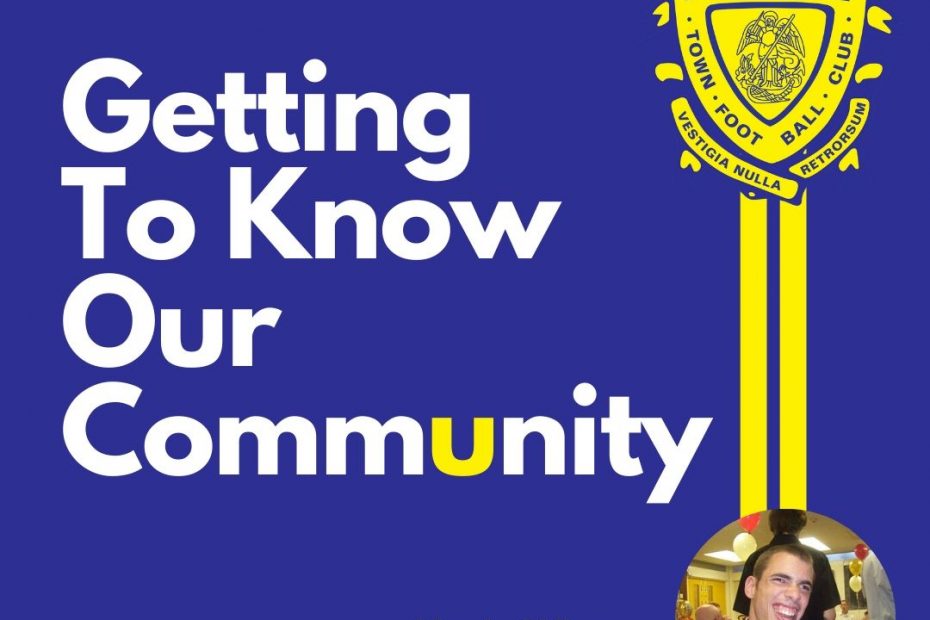 Over the course of the next few weeks we’ll be talking to Basingstoke Town Fans both young and old and getting to know them a little bit better. We’re proud of our network and the fact that our club unites so many different people who all share a common love of Basingstoke Town Football Club. 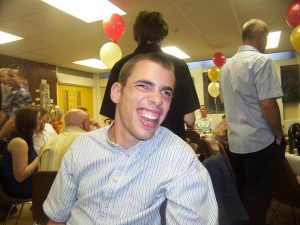 The first in our series saw us talk to Kevin Winter…

So, tell us a little bit about yourself?

“My names Kevin, I’ve been a Basingstoke Town supporter since I was seven years old when I started going along with my Dad. I was born with cerebral palsy which has meant I’ve been in wheelchair all my life; but I don’t let that from stop me for doing the things I love to do. I love following Basingstoke Town Football Club and I also follow Tottenham Hotspurs. I’m also a big fan of Basingstoke Bisons [Basingstoke Ice Hockey Team].

How did it all start for you at Basingstoke Town? 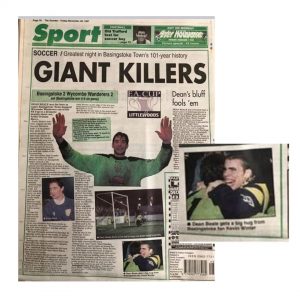 I can’t quite remember who Basingstoke were playing but I remember loving my first game. I remember being really shocked at how a relatively small ground could generate such an incredible atmosphere. From there, I remember just wanting to go back and back and back, I loved it.  It was great getting to know some of the players, at that time it was the likes of Dean Beale, Paul Coombs, Alan Carey, Chris Ferrett and Ernie Howe was the manager. I remember when Wycombe played at the Camrose in 1997 where we went onto play Northampton Town – I was mascot at the game. The Wycombe game was the best I’ve eve 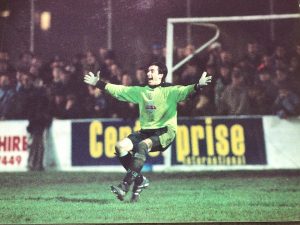 r been to. Dean Beale saved a penalty and straight after the celebration in the photo (see left) he came hurtling over but was flanked by stewards, but he yelled ‘let me get through, let me get through’  until he found me in the crowd and gave me a big hug (see pic above/right) – it was a great moment.

Who’s been your favourite ever Stoke player?

There’s so many to choose from, Dean Beale, Paul Coombs, Alan Carey, Bruce Tydeman, Steve Richardson and Steve Harris were all favourites of mine; but if I was forced to pick one? It would have to be Dean Beale.

Are you looking forward to the next campaign?

Yes… assuming we’re back in Basingstoke! I went to Winchester just for the first game; but it was very difficult for me as there was no real view, there were very limited disabled facilities. So I’m really looking getting back to Basingstoke. Every year Sarah makes sure she holds me back a season ticket. We had disabled facilities at the Camrose, we had a great view. We were really close to the pitch, although we did get hit with the ball on more than one occasion!

What’s the best thing about being a Basingstoke Town fan?

I wanted to support my home-town club and soon as I knew there was a football club here I knew I wanted to support the guys. Before the Northampton game they allowed me to go to the Camrose as they used to let me go and watch the boys training. I gave a team talk before their last session, I even made it onto BBC News. 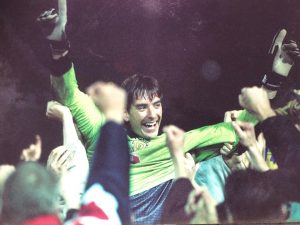 I do miss my football; I know a lot of people from the football club and they knew me – it’s just such an enjoyable day – I do miss it. I cant wait for football being back in Basingstoke.

Little known fact about Kevin is that he and his Dad once recorded an FA Cup song for the club called the Camrose Strut. Sadly, we are yet to unearth a copy – but we are on the hunt!