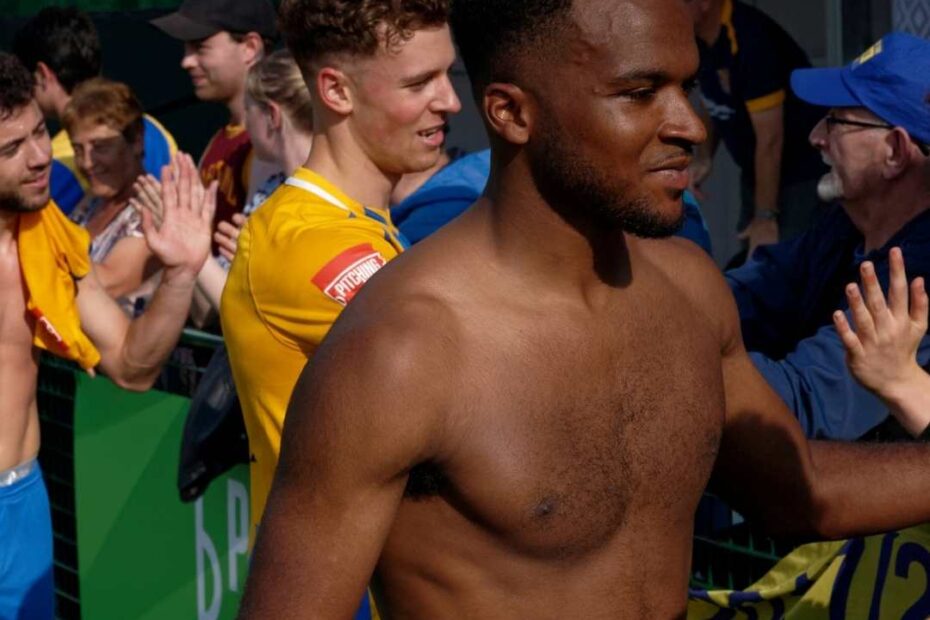 Basingstoke Town progress through to the next round to the FA Cup following an impressive home display against a tough and talented AFC Totton side.

We last faced AFC Totton back in October of last year where we were narrowly beaten 3-2 in our opening official fixture at Winklebury. We were expected to see a repeat of the weather that poured down that day, but the blue skies opened up over Winklebury as we looked to avenge our defeat the previous season.

Before the game, a number of mascots were welcomed into the first team changing room to be acknowledged for their quick thinking during our Summer Camp a number of weeks ago. A young player was taken quite seriously ill, and the reaction of those boys around him allowed for a safe and speedy transportation to hospital. They were met by a huge round of applause by our first team squad.

AFC Totton got us underway in the three o’clock kick off in a balanced opening exchange. Basingstoke created the first notable chance when a neat move down the left hand side saw new signing James Haworth flash a ball across the box but it was collected by the Totton Keeper, Noice.

Brett Williams then was offered an opportunity to strike at goal following a foul conceded just outside of the box, but it was blazed over the bar much to the delight of our formidable support. Debutant keeper Paul Strudley was called into action for the first time following some neat footwork by Hisham Kasimu who danced into the box to find Brett Williams whose low driven shot was collected by ‘Struds.’

On 27 minutes, George Reid in his common robust fashion battled his way past a number of Totton players and found a yard to unleash a fierce strike but it was always going high.

A number of chances and penalty appeals were waived away by the ref for both sides and the final stages finished with a flurry of quick attacking football where McKoy Palmer nearly found himself on the end of a Reid cross but it was claimed well by Noice.

The boys were welcomed out onto the pitch with another rousing reception from our home fans. Basingstoke got straight to work and with a well worked free kick Dunn found Lynch who twisted and turned and managed to fire in a cross that clipped the crossbar and made for an awkward save for the Totton Keeper.

Then on 51 minutes Kasimu raced through on goal but was brought down by Strudley, claims of making contact with the ball were waived away and a penalty was awarded. Strudley got a good hand, but the power in the shot by ex-Reading pro Brett Williams was enough to put Totton 1-0 up.

The goal sparked Basingstoke back into life and it was only minutes later when our own penalty was awarded when Medway clumsily brought down Lynch inside the area. Our striker picked up the ball and finished well to draw us level!

Brad Wilson was next on the list of chances when a set piece effort fell to him just outside the six yard box, but he was unable to steer his header into the bottom corner as it falls agonisingly wide. Town continued to pile the pressure on and on minute 81 our first change is made when Academy player Lloyd Snell replaced McKoy Palmer.

Lloyd is straight into the action drifting past a couple of players, his ball out wide was met with a neat combination between Reid and Williamson and the latter was rifled down inside the box – the referee after a short pause blew his whistle and pointed to the spot. Lynch stepped up, and Lynch buried the ball into the bottom corner! The Basingstoke players pile behind the goal to celebrate with our impressive crowd of just under 500.

Young midfielder D’Andre Brown pulled up with cramp towards the end, and experienced player Adam Everiss was put on to help Marshall the game from a wide left position with Reid and Wilson taking up more central spots alongside Skipper Simon Dunn who completed his first 90 minutes for 18 months!

The final whistle is blown and Basingstoke are back in the hat for the next round of the Emirates FA Cup.

We caught up with Dan Brownlie after the game for his comments:

“It was a determined performance. I’m really pleased for the boys today, every single one of them played their part – even the lads that didn’t get on. It’s easy to sit on the bench and find holes in performances, but these boys elevate each other. It was a well rounded performance against a very good side – so we’re really pleased.”

“I thought Dunny was a different class, but it was interesting speaking to a number of fans after the game as I got a different man of the match vote with everyone I spoke to. That sums up the team performance that it was. There was a real togetherness on show today, a steeliness about our play – and whilst it’s not a huge focus of our game, it was another demonstration of our refusal to be bullied by anyone. It a good day, I enjoyed that one!”

Basingstoke now turn their attention back to league action next Saturday when we host the much fancied Hanwell Town in a three o’clock kick off at Winklebury.