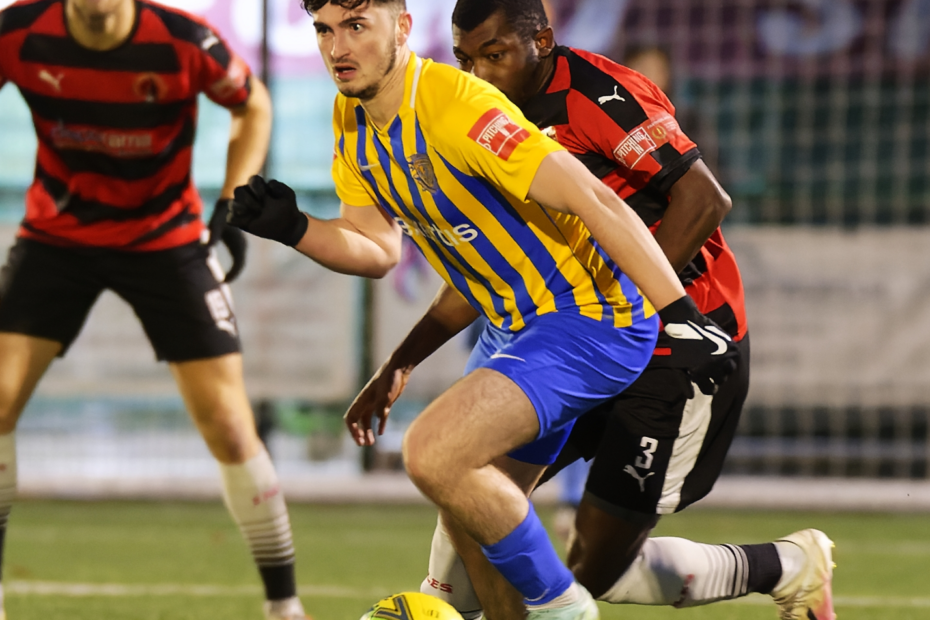 Dan Brownlie praised his side’s performance, labelling it the best of the season as Basingstoke dispatched fellow promotion challengers Bedfont Sports by a 4-1 scoreline on Saturday. Recent top-of-the-table clashes had seen points dropped in stoppage time against both Bracknell and Uxbridge while also being handily beaten at home to Chertsey but ‘Stoke made a statement with an imperious performance on the way to leapfrogging the Eagles into 3rd place in the league.

Town controlled proceedings from the start, the ability of D’andre Brown to win the ball and Anton Rodgers to retain it leading to lengthy spells of possession as the visitors confidently strung passes together. Stefan Brown returned to the side up front and quickly set up the first goal, dropping deep to play Brad Wilson through and the forward made no mistake, poking the ball through the legs of the advancing Dimitrios Kyriatzis. Brown was unlucky not to find the net himself, a close-range shot blocked before Kyriatzis made a miraculous save from the rebound but Ben Cook broke clear on 20 minutes to beat the home keeper from a tight angle to double the lead.

Next door to Heathrow airport, Basingstoke were flying. Just over half an hour had been played when Wilson was tripped on the byline and Stefan Brown was able to convert the resulting penalty for 3-0. A rare wayward pass allowed Lewis Flatman to race through and beat Paul Strudley to cut the gap to two goals just before half-time but Wilson’s second, his sixth in his last four games, essentially killed the game five minutes into the second half has he drilled unerringly across Kyriatzis and into the bottom corner.

Ezekiel Bademosi blazed high and wide from inside the box but Town kept their grip on the match, ensuring there was to be no nervy finish, despite Bedfont sub Charlie Postance breaking through twice  in stoppage time but shooting off target.