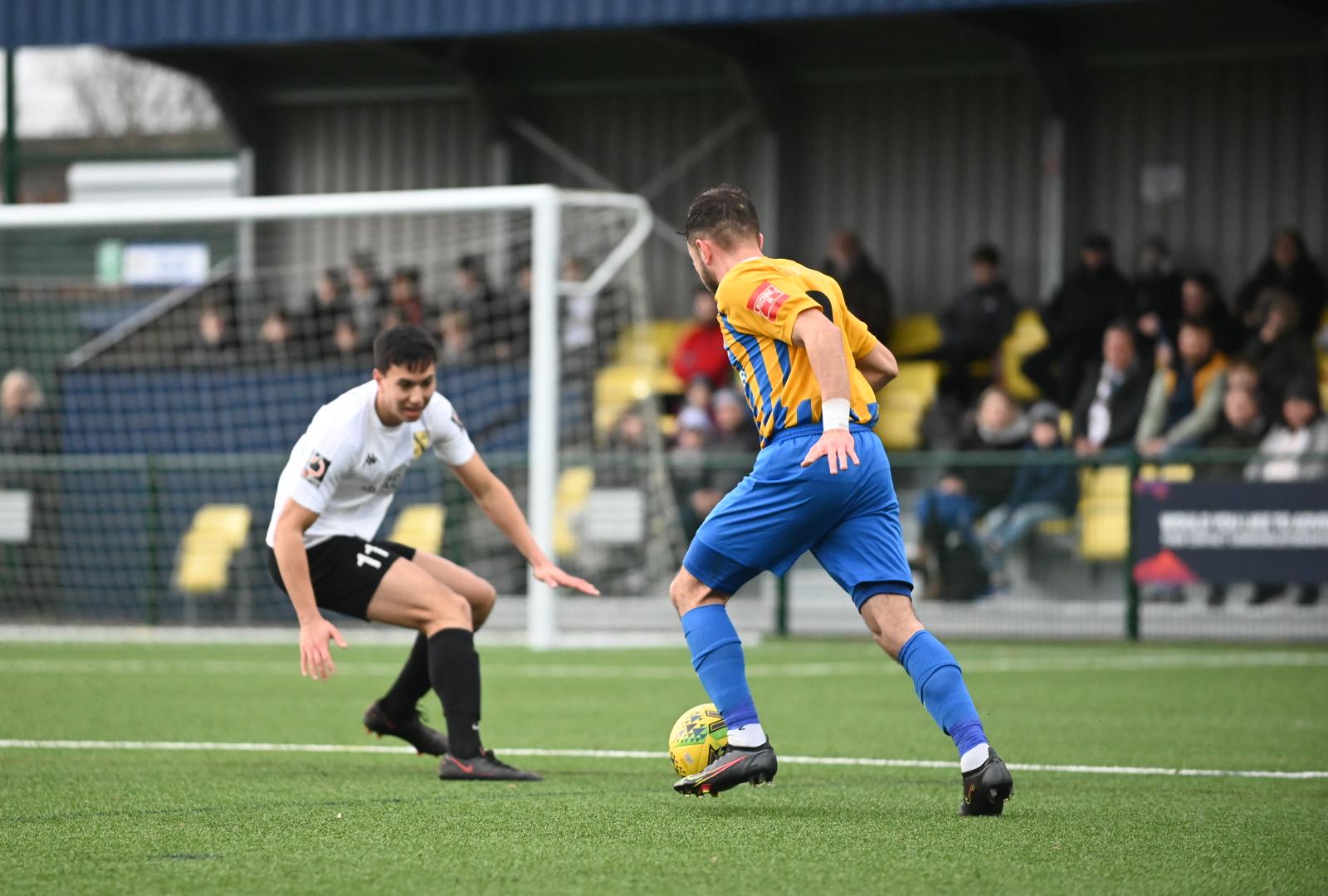 A week on from the dramatic derby victory against Thatcham, Basingstoke took the field for the first time in 2022 and served up another entertaining encounter in a 2-2 draw with Westfield in front of the biggest home crowd since the emotional final match at the Camrose in 2019.

824 people saw Town recover from a poor first half performance to fight back from two goals down and save a point thanks to goals from Conor Lynch and Lloyd Snell, before seeing a stoppage time winner controversially ruled out.

It was a point saved according to Dan Brownlie at full time where he described it as one of Basingstoke’s worst halves of the season, that included an impromptu team talk on the sideline as the hosts fell 2-0 down within the first quarter of the game against Westfield who sat 14th in the league. The problems started immediately, a right-wing cross making it past three Town defenders for Westfield’s Tayshan Hayden-Smith to finish at the far post just 40 seconds in. Basingstoke struggled to click into gear, failing to muster a shot on target before Westfield doubled the deficit on 23 minutes. A high, angled ball towards the box evaded Robb Sheridan for Sam Evans to control and finish tidily beyond Paul Strudley. Brownlie called his players over to the bench as Westfield readied themselves for the restart but Town toiled for the rest of the half.

The visitors again threatened early after the break, Strudley making a key save when left one on one against Evans as Simon Dunn was robbed of possession. ‘Stoke grew into the second half though, the introduction of Jack French and a slight tweak of shape helping. Snell shot over from range and George Reid had a shot deflected wide before Stefan Brown’s clean strike from 15 yards clattered the post. The bumper crowd sensed momentum growing and just a minute after hitting the woodwork, Basingstoke pulled one back as Lynch redirected Dunn’s low shot inside the six-yard box to leave away keeper Callum Backhurst with no chance in the 65th minute.

With the bumper crowd pushing the home side on, Brown lifted another chance over the bar from close range, but Snell soon tied things up. The teenager beat his marker to cut onto his left foot and pull a low shot inside the near post for his seventh goal of an impressive first full season of senior football. Brown steered another good chance wide as the minutes ticked away and at the other end, Strudley made a superb fingertip save to deny Afolabi Soyemi-Ololade. Deep into stoppage time, Backhurst dropped a high ball into the net under pressure from Lynch, only for the referee’s whistle to signal a foul against the striker and cut the celebrations short, ensuring the sides settled for a share of the spoils.