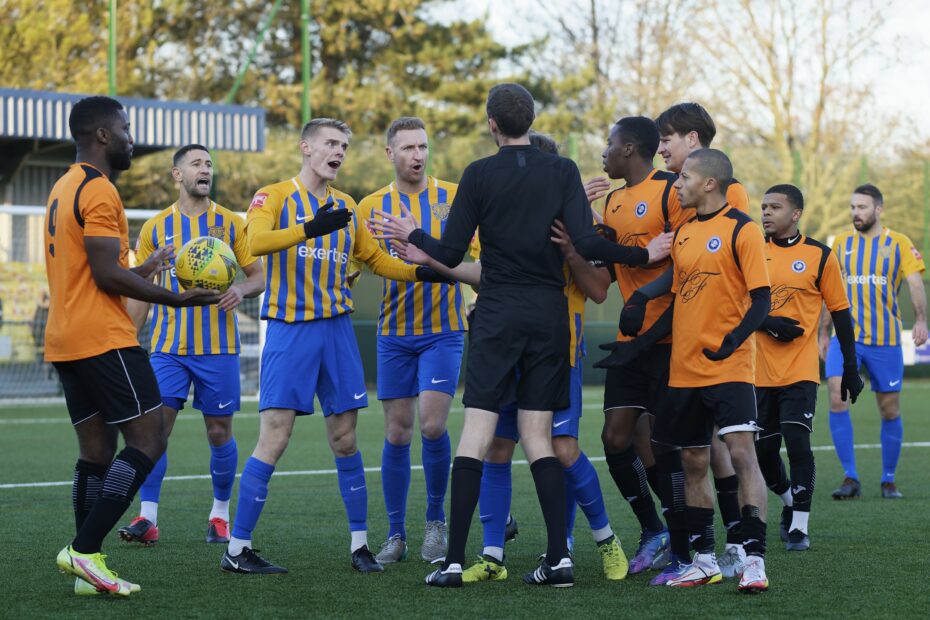 Ten-man Basingstoke Town were beaten by a single goal to nil at Winklebury on Saturday by fellow promotion challengers Marlow in a match filled with controversy. The only goal came half an hour in as the ball ricocheted against the unfortunate Nathan Smart and over the line after Paul Strudley had earlier saved a penalty before Brad Wilson received an unfortunate red card early in the second half for a soft challenge on visiting keeper Simon Grant.

There was a decision to be made just six minutes in as visiting midfielder Junaid Bell went through George Reid with a strong tackle and after much deliberation was shown a yellow card. Marlow had a golden chance to open the scoring, Jordan Brown tripped in the box by Anton Rodgers, but Paul Strudley dived to his right to parry the spot kick and add to a growing list of penalty saves this season. Marlow did take the lead in fortunate circumstances though fifteen minutes later. Robb Sheridan and Daryl Wollers struggled to get to grips with Marlow forward Nnamdi Nwachuku and as both defenders tried to challenge the striker, the ball deflected across the box and into Smart who was unable to react in time to stop the ball going in.

Marlow had conceded just six goals in 12 games prior to the match and ‘Stoke’s task was made trickier as Wilson rose to challenge Grant for a high ball. It seemed an innocuous challenge but with Marlow protests ringing in his ears, the referee produced a red card. Basingstoke chased the game but struggled to create chances with the disadvantage while Marlow threatened on the counter. Conor Lynch drilled a volley across the face of goal, but Bell struck a sitter over the bar from fifteen yards out before the next flashpoint. With 20 minutes still to play, Brown gripped Basingstoke’s Anton Rodgers by the neck, wrestling him to the ground after the ball had gone, sparking further angry protests and players from both sides – including each goalkeeper – crowding around the referee on the halfway line. Brown escaped with just a yellow card while James Haworth was also booked for his involvement in the melee.

Marlow ground out the clock effectively, further frustrating the home fans, and created the better chances in the closing stages. Nwachuku failed with two glorious headed opportunities while Strudley saved from Bell and Kameron English and ‘Stoke failed to find the net for the first time in a league game since the suspended 2019/20 season.