Basingstoke Boy Back In Blue 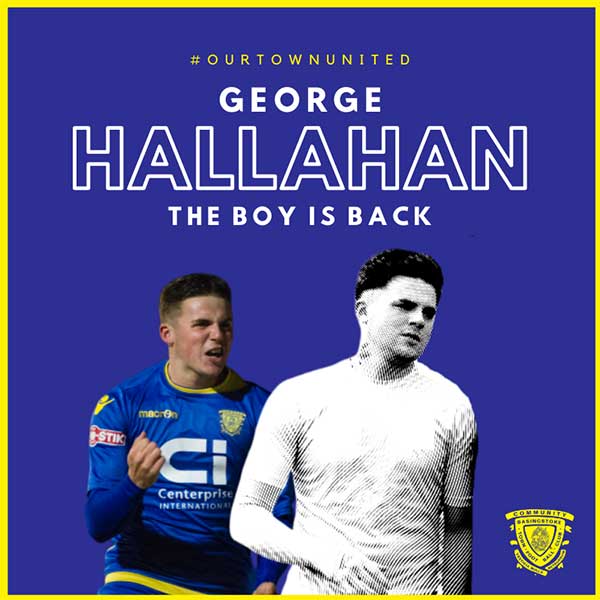 George Hallahan has been confirmed as a Basingstoke player following a successful transfer from near neighbours Tadley Football Club.

Already boasting 16 goals to his name this season, George now joins us for his second spell at the club. The first came as a teenager where he quickly became a fans favourite scoring a number of goals in his debut season.

‘We’re really pleased George has joined us, he’s a proven goalscorer and will add extra firepower to our front line. He’s shown a real desire to play for our club; he’s a Basingstoke boy and I know he’s very proud to be offered another opportunity to represent the club.’

‘I’ve worked with George before – he has matured as a footballer since the last time he was here; he’s played in and around this level and done very well – we need that type of experience amongst our young group. You can see there is a real drive behind him and I’ve no doubt that George will produce for us.’

‘I’m really excited to be back and representing my town again. I’ve no doubt that this is the right time both on and off the pitch to really push on with my football and hopefully continue where I left off four years ago.’

‘Basingstoke was a massive part of my growing up and all I knew from grass roots. I can’t wait to get back for the ‘Stoke. There’s been a lot of change over the last few years here, but I’ve no doubt there are exciting times ahead for Basingstoke town and I want to be part of that leading the line, wearing the stripes. The club’s always has and will have a place in my heart and can’t wait to get going and get scoring for the fans again.’