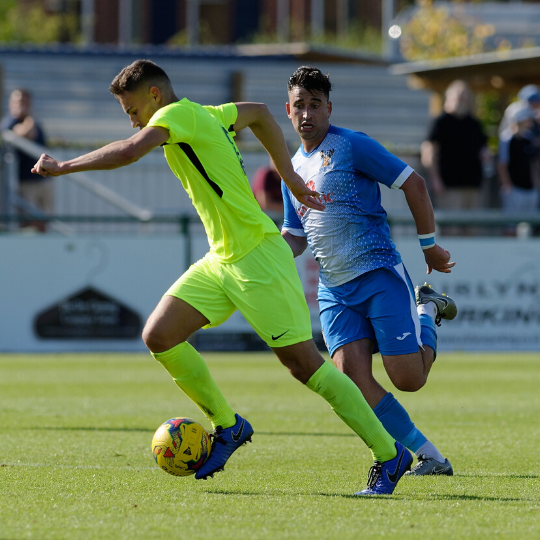 In his debut season at Step 4 and with us here at Basingstoke Town, Harrison Cliff proved to be a pivotal player during the season and won many plaudits for his ability to cover so much ground. His tireless work-ethic made him a first team regular despite his tender age as Dan Brownlie comments ‘In watching Harrison play, you’d be forgiven for forgetting his young age. He’s a talented boy, there’s no question about that; but it’s his work rate, endeavour and, above all else, attitude that will no doubt serve him well in this game.’

We can reveal that Harrison has accepted a Scholarship to play football in California, America and whilst we are of course disappointed to lose such a talent; we’re proud of his continued development and wish him every success over in the States.

We caught up with Harrison this afternoon…

Congratulations on your scholarship, where is it you are going?

Thank you very much! I’m heading off to Cal Poly Ponoma University in California. I’m meant to be leaving towards the end of July/early August, however with the current situation involving COVID-19, this will likely be delayed.

What are your thoughts on your own personal season?

In retrospect, the beginning of my season didn’t go the way I wanted it to. I struggled to play my football – I think that knowing that this is the highest level of senior football I had ever played, I had to play a different way. But, in fact, it was the realisation that I just had to do what got me noticed and inevitably signed to Basingstoke Town in the first place.

In addition to that, my confidence levels were very low. Confidence in my footballing ability has always been something I have struggled with. Looking back, I think this was heightened with the fierce competition that I hadn’t be introduced to before. Furthermore, competing for places against players which had played a considerably higher level than me and for a significantly longer amount of time intimidated me if I’m honest. As a 17-year old ‘kid’, I didn’t feel like I belonged. However, as I grew into season, I was given many opportunities to play, even when things weren’t going my way and the team as a whole wasn’t performing at its best. The trust that both Martin and Dan showed me throughout the season allowed me to adjust to the competitive nature of this level, be myself and just enjoy football – I think I lost that for a short while. The belief the boys showed me too only boosted my confidence. Towards the latter stages of the season, I felt less like a kid and more like a man. I felt confident that I could bring my role to the team. With minor hiccups with slight injuries and niggles, I began to build a level of consistency. Football is revolved around opinions and I like to believe that in my opinion my skillset aided the team in some way!

From a personal point of view and the team’s point of view, our home fixture against Highworth Town back in October was the game that stood out for me. On a personal note, to score my first goal for Basingstoke Town was huge for me and I loved every second of it. Being able to equalise after Wrighty’s finish put a buzz all round Winchester which still to this day I can’t describe! Then for Zach to bury one in added time to win 3-2 was unreal! To see all those fans shouting, cheering, clapping – and then to be able to celebrate with them? Nothing beats that in my opinion. I hope to get that feeling again very soon!

How was your first year at Basingstoke Town?

In truth, I loved every second of it. The highs and the lows. I learned so much from playing at Basingstoke Town, which as an 18-year old aspiring footballer, is priceless. I remember being told about that the fan base at Basingstoke Town was huge, but I took it with a pinch of salt if I’m completely honest. But to experience the passion of the fans is incredible! The players I’ve played alongside and staff I’ve worked with have all been great for my development – they’re the reason that I feel like a completely different player now, which is crazy in the space of one season. In terms of learning and developing as not just as a player, but as a person too, it has been one of the most influential – if not the most – influential seasons of football I’ve had in my short, but hopefully long-living, football career!

I would like to thank the fans of Basingstoke Town Football Club. While playing, I realised how important you are and how much of a role you play for this club. Thank you for sticking by us as a team (even though it was extremely hard) and myself as an individual. Your passion and belief feels like a 12th player on the pitch! I hope some of my performances repaid your efforts! Thank you to the volunteers and staff that work extremely hard to make sure this football club can run. Despite my extremely short time in non-league football, I have seen first hand how volunteers and staff are the foundations of any non-league club. Without you, this club would struggle to be able to showcase football for the community. Finally, the management and players. Thank you for bearing with me and allowing me to play my football. The advice I’ve received from you all I will make sure to carry with me on wherever my future endeavours take me!

The reason I’ve chosen to go to America is because I couldn’t turn down the opportunity to showcase my talents to different coaches and players alike. To be able to do this in a foreign country will only add to that experience bank which I’m building up. I’m curious to see whether this opportunity will lead be to more opportunities in semi-professional football, or the main goal – professional football. If this option wasn’t available to me, I would be remaining at Basingstoke Town Football Club. As cliché as it sounds, Basingstoke Town is a special club, there’s no doubt about it. I will look back at my memories fondly and remember it as the club that turned me from a boy to a man and sincerely hope I get the opportunity in the future to pull on a Basingstoke Town shirt again.

I hope to see you at future fixtures when I come home. I have no doubt that next season will be a special one for this club.

It has been agreed that Harrison will take part in pre-season training sessions to boost his fitness levels before departing for America. We wish Harrison every success and the door of course remains open upon his return to the UK.